All the original glass was destroyed in the 1940 bombing; during the re-building clear glass was placed in all the windows. In three of the windows stained glass was later introduced. 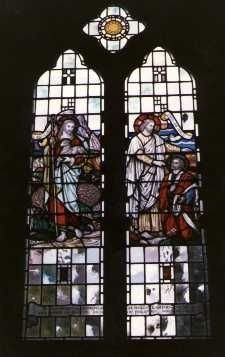 As a memorial to the Rev. R. S. Lound, who died in 1947, the PCC decided to insert stained glass in the window over the new Side Altar in the North Aisle. Mr. Thomas William Camm of Smethwick was responsible for the design and making of the windows which were completed and erected in 1950. The Theme of the Window is, in one light, Christ the Good Shepherd, and in the other, Christ’s commission to St Peter, ‘Feed my sheep’. No doubt this was intended as an allusion to Mr. Lound’s outstanding qualities as a pastor. 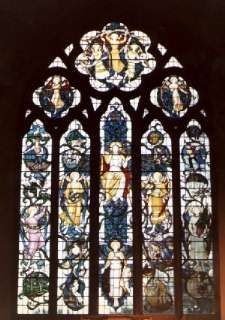 Christopher Webb, the excellence of whose work in Exeter Cathedral and in Stoke Church, North Devon, was known to the Vicar, was invited to design and make this window which was installed in 1956. The theme of this beautiful window is the Benedicite ‘0 all ye works of the Lord, bless ye the Lord’, which words appear on a scroll at the upper part of the window.

Surrounding a dignified portrayal of Christ in Majesty seated before a great Cross are numerous vignettes appropriate to the four seasons; children skating hand in hand; the sowing of seed and the reaping of corn; a woman and child bringing home firewood; a countryman sheltering from a storm; a mother seated with her child on her knee; children gazing at a Christmas crib; the cow and the fox, the lamb and the hen are there and much besides. These are linked by a green meander signifying Life. The lower central figure of the angel in the cloak symbolizes Light and Darkness and two angels present the Fruits of the Earth. 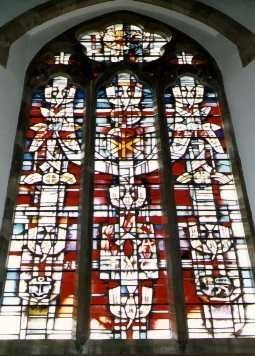 This window brilliantly designed and executed by Professor L C Evetts and dedicated in April 1967 has as its theme the sanctification of men’s work. As a symbol of this a silver chalice is the central feature, chosen on account of the predominance of craftsmanship in metal in the industries of Birmingham; the service that these industries and all men’s work can give is seen as symbolized and sanctified by the sacramental use of the chalice. On its pedestal are depicted the tools of the silversmith’s craft, surmounted by tongues of fire signifying the Holy Spirit, Whose Seven-fold Gifts are suggested by the seven descending doves which surround the chalice. On this is the Chi-Rho symbol, the earliest monogram of Christ, Himself a craftsman it is believed. And as signs of that integrity which, by Grace, must lie behind any human activity which can be seen as an offering to God and our fellow men, there appear at the bases of the lateral lights the Birmingham hall-marks, the anchor and the lion. These symbols also have Christian significance, the anchor standing for Hope and Steadfastness and the lion for Resurrection and for Christ.

It is hoped that this window may enable men to see work in its right perspective, not as the curse of Adam, nor as the prerogative of Mammon, but as related in some remote and humble way, to the continuous Creativity of God.

Extracts from A History of St Anne’s, Moseley by George Hearn, MBE, MD, FRCP, published in 1974.